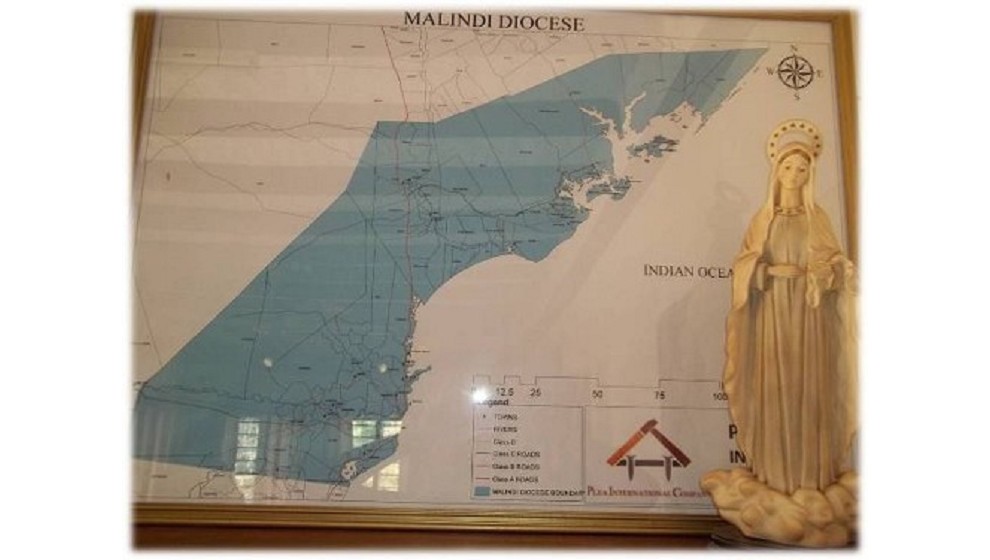 It is a young Diocese. Born with the Papal Bull of John Paul II "ad provhendam" on June 2, 2000, it extends over a territory of 33,254 sq km, with a population of over half a million inhabitants. The Diocese, divided into 12 parishes, has 25 priests (19 regular and 6 diocesan priests) with 872 baptized per priest. In the Diocese there are also 22 brothers and 17 sisters. Of this half million inhabitants just a little more than 21,800 are baptized; therefore only 4% of the population.

The Bishop of Malindi Mons. Emmanuel Barbara of Malta

The second bishop of the diocese has been mons Emmanuele Barbara. He succeeds Msgr Francis Baldacchino who died on 9 October 2009, and after having been under the guidance of an Apostolic Administrator.

The new Bishop Msgr. Emmanuele was appointed on July 9, 2011.
Emmanuel Barbara Maltese was born on October 27, 1949, in the parish of Gzira, in the Archdiocese of Malta. He entered the novitiate of the Capuchin friars on September 26, 1966. After completing his studies in Malta, he was ordained a priest on July 20, 1974. Numerous positions held in both Malta and Kenya where, since 1990, he was Director of Formation in Nairobi and later professor in various disciplines, until his election as Provincial Minister in Malta since 2010. In 2011 he was appointed Bishop of Malindi so he went to this city to preside over the life of the diocese entrusted to him.

With immense sadness we share the news of the loss of the dear Bishop Msgr. Emmanuel Barbara, we will continue our journey by treasuring the many advice he received and carrying in the heart a lot of gratitude for having always appreciated the work of Misheni na Ukarimu Onlus.

The Bishop of the diocese of Malindi, Emmanuel Barbara, passed away this morning in the Kenyan town.
Sick of heart for some time, he had remained head of his diocesan office until yesterday and some faithful had met him recently for the new year’s wishes. A heart attack would have resulted in the death of the Bishop.
Barbara was 68 years old.
The announcement was made directly by the Catholic Diocese of Malindi.
"We are shocked by the sudden death of our beloved Bishop, Monsignor Emmanuel Barbara, which took place this morning - writes the press office of the Diocese in its social pages - let us pray for the peace of his soul".
Archbishop Barbara, a Maltese like his predecessor Francis Baldacchino, the first bishop in the history of Malindi, was appointed head of the Malindian district in 2011 by Pope Benedict XVI.
Ordained deacon in 1973, he had been on the Kenyan coast since 2008. In 2013 he had also assumed the regency of the Archbishopric of Mombasa, in that vacant period.
Many Italians, holiday residents and association volunteers, had with him a relationship not only of collaboration and religious sharing, but also of friendship "

The Misheni na Ukarimu Onlus (Mission and Charity) in Mida

It is an Association that in all respects, on the indications of the Diocese of Malindi, works in harmony in favor of both evangelization and human promotion projects of the Diocese. It is from it that Misheni na Ukarimu Onlus has been organized to work on Midas. The Village not far from both Malindi and Watamu is the object of special attention by the Diocese. It is known that villages, like that of Midas, need everything. There is in Mida a discreet and good Christian Catholic community. It is at the Misheni na Ukarimu that collaboration and help has been asked of the community of Midas. This is why we are in Mida as volunteers and collaborators.

It’s a new Association recently created by a group of doctors from Tuscany, that has entered into an agreement with the Diocese of Malindi for numerous services that the Onus intends to offer to the dispensaries of the Diocese. It is headed by Midas where it is already operational and from which it extends its work in the area. An example of the possible collaboration between non-profit organizations which, in mutual respect, and in different skills, give important support to the mission.